After receiving quite a few requests on information about the Enablia TitanSDR and it’s capabilities, I decided it would be good a good idea to create a demonstration video that would hopefully show just how good an SDR it is. The video is at the end of this blog.

I think that a lot of people can’t understand just why the two versions are the price they are, especially when it seems that a new dongle SDR is being evolved every day at a ridiculously cheap price. Yes, they are expensive but when you compare the price of these SDR’s to a top end desktop receiver, such as the Icom IC-R8500 for example, then it is fairly comparable.

But you must consider the fact that the Titan is really more than one receiver. The Pro version is 40 receivers, the standard is eight. You can’t record independently using the Icom, you need some additional software or a digital voice recorder plugged in to the receiver; and even then you can only record the one frequency – the Pro can record 40 frequencies, the standard can record eight.

The TitanSDR Pro can monitor up to 40 frequencies at the same time. Here, 10 frequencies are being monitored, mainly Oceanic ones.

Then, you can’t really record any bandwidth to play back using the Icom, but both versions of the Titan can record up to three separate bandwidths. These can then be played back, either through the SDR itself, or on another PC using the supplied USB dongle that carries a second version of the software – and if you did this you could be listening to, or recording, further frequencies or bandwidths. And all these separate bandwidth recordings can, of course, be played back multiple times, with multiple recordings being made within them; or data can be decoded; or signals analysed – what ever you require from an SDR.

This image shows the Titan monitoring 12 frequencies, 6 of which are decoding ALE using PC-ALE. This can take place in the background, while listening to the other frequencies on the SDR.

But, of course, this is just standard for any SDR isn’t it?? But is it?? Can you think of another SDR that has the capability to monitor/record 40 frequencies at once? I can’t.

The nearest SDR I found to the Titan in quality of not only recording capabilities but in quality of filters etc. meant that I would need to buy around 13 SDR’s of this model and spend over €30,000. Yet, just one of this model costs pretty much the same price as the Titan. Now, with that knowledge, the price of the TitanSDR’s really doesn’t seem that bad after all.

Don’t forget, the TitanSDR is a Military spec. SDR, designed originally for agencies to monitor multiple frequencies for analysis and data collecting. It already has top specifications but Enablia are still willing to listen to the users and add requested features if they can. They have already done this with quite a few ideas that myself and other users have suggested. 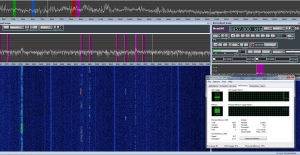 You’d think that the Titan would be a CPU guzzler wouldn’t you? Well it isn’t. Here the SDR is running 31 frequencies, whilst making multiple decodings using MultiPSK and PC-ALE. The CPU is running at only 27%, and that was it’s max reading.