Despite the best efforts of the Royal Mail service, I have been able to get my hands on a Low Noise Amplifier created by Adam at LNA4ALL. The Royal Mail showed just how useless it is, when the parcel arrived here in the UK in just 11 hours from Croatia on February the 14th, but then not getting delivered to me until March the 14th – yes, one month! There is no surprise that courier companies such as DPD and Hermes are getting more business than the Royal Mail – they are bloody useless.

Anyway, the reason for the purchase is for a later review on an AIS dongle that I will be testing, but which has unfortunately been possibly damaged before getting to me.

So, as I had some time to spare I thought I’d run a quick test on how the LNA performs against the claims that is shown on the LNA4ALL website. For the test I used a quickly built 12v to 5v PSU that was connected to a Maplin bench PSU and also a Rigol DP711 Linear DC PSU where I could ensure a precise power input. As it was, it was good that I used the DP711 because my quick PSU was only chucking out 1.2v at connection to the LNA4ALL, despite an unconnected output of 5v – some work needed there I think.

Despite this lower power the LNA4ALL still worked with just the 1.2v input, though the results where not as good.

Other equipment used were a Rigol DSG815 Signal Generator and a Rigol DSA1030 Spectrum Analyser (no longer available), along with various Mini-Circuits shielded test cables. The Rigol equipment I purchased from Telonic Instruments Ltd last year.

Below then is a table that contains all the relevant data. As you’ll see the Gain claim is pretty much spot on with some being over. Just a couple of frequencies are below that which is claimed, especially at 28 MHz.

A couple of things to note.

Firstly, somehow I managed to miss testing 1296 MHz. I obviously didn’t put it in the table in Excel before I started 🙂 Also, the DSG815 only goes up to 1.5 GHz so I couldn’t test above that.

Secondly I ran a test for the AIS centre frequency of 162 MHz, for which there was no comparison to the LNA4ALL data. A gain of over 24dB though shows that the LNA would be perfect for those of you with AIS receivers that may want to get better reception. To prove the theory I compared the LNA reception against data without it connected to the NASA Engine AIS receiver that I currently use. In ShipPlotter I average a max range of around 15nm without the LNA, but with it connected this increased to around 22nm. The number of messages received also tripled as it was able to dig out the weaker signals.

The NASA Engine isn’t a bad receiver, but it is a frequency hopper rather than a dual monitor, and so it changes between the two AIS frequencies every 30 seconds (161.975 MHz and 162.025 MHz). I suspect a dual monitor would give better message numbers and range.

Below is a graph made using the excellent software by Neal Arundale – NMEA AIS Router. As you can see the message numbers (or sentences) for over an hour are pretty good – well, it is a vast improvement on what I used to get with my current “temporary” set-up, with 419 messages received in an hour. The software is available at his website, for free, along with various other programs that you can use with AIS. If you’d rather not use ShipPlotter he has created his own AIS Decoder which can be linked into Google Earth and such like. Visit his website for more information.

My antenna isn’t exactly top-notch. It is at a height of just 4 metres AGL in the extension loft, and it is made from galvanised steel angle bead used by plasterers to strengthen corners prior to skimming – this I cut down as a dipole for a target of 162 MHz. As usual with my trimming of antennas, I cut just too much off and ended up with it cut to 161.167 MHz. It gives a VSWR of 1.018 and Return loss of 40.82dB, with 162 MHz being approx. 30dB Return loss which equates to 1.075 VSWR – that will do.

Also, as I live right on the coast, about 50 metres from the sea, I’m practically at sea level, which doesn’t help much with range and signal reception either. Despite this the antenna produces great results, though it is just temporary until I can get a new homebuild up on the roof. 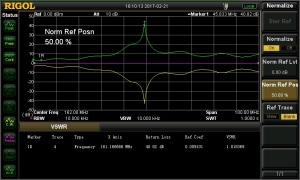 The LNA4ALL retails at various prices depending on what option you go for. I went for the aluminium box version so it was around £54 including the delivery. I had looked at a Mini-circuits equivalent, and when it looked like the LNA4ALL was lost I did actually order one. But this was nearly twice the price, and seeing as the LNA4ALL contains many components from Mini-Circuit I doubt it is any different really.