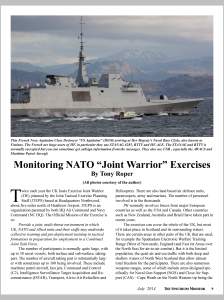 The first article is about the Joint Warrior exercise that took place in March/April this year, and how and what to listen out for when these exercises take place twice a year in the UK. I wasn’t expecting this article to be published until September so this was an added bonus this month

The second article is about how I got into listening to Air Traffic Control and how this then took me down the road to becoming an Air Traffic Controller, an aviation/military photographer and writer, and into monitoring the radios in general – in particular HF

As well as the articles, there’s about 11 photos of mine included alongside. I also provided the cover image. 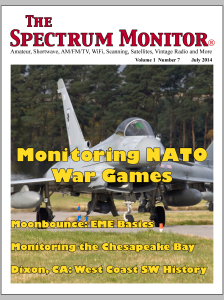 The magazine is available either to buy individually at $3 each or by subscription for $24 for one year. Either way the magazine is well worth the money

About a month ago now, a new forum was created for the Military Monitoring enthusiast – MilCom

The main aim of the forum is bring together those of us that are interested in monitoring Military Communications, be it VHF/UHF, HF, CW, data, SATCOM etc. The posting of radio logs is actively encouraged. In just a month the membership has passed 110 with posts already at 850+; and this is without any real advertising of the forum. One thing you’ll notice if you head over, is that it isn’t just about Aviation. The forum covers all areas of Military Communications – Aviation, Maritime and Land (Space too if you really want to)

As well as the forum area there is a database section which contains information on Military Callsigns, VHF/UHF frequencies, HF frequencies and other things such as common abbreviations and terms used by the Military. There’s also an interactive map. These databases are updated almost daily by a team of us, and can also have anything missing submitted to the team for addition once confirmed. The databases are continually growing, are more accurate than any printed publication (which is generally out of date the day of printing) and more importantly – FREE

The only proviso to this data being available is that members participate in the forum and do not just “lurk”. The membership is continually monitored by the team and trimmed if necessary. That being said, we are a friendly group so don’t let the rules put you off – instead join up and participate.