The Space Shuttle had its final mission. Weird to think thats it for the Shuttle. Luckily I was off for both the launch and landing. I was able to get a brief recording of them as they went over France after the launch, a copy of which is here: Atlantis over-flight They landed safely on Thursday July 21st 2011, ending 30 years of flying. I saw the first ever launch live on TV way back, I saw the last ever landing.

Larry is probably the most productive thing thats happened, but the weather has seriously played havoc with the progress. The consistant rain, for nearly 2 months, meant I couldn’t get to work on him. After all, electrics and water don’t mix very well, neither does nice new interior fittings. But i eventually got the front finished, just in time, as the next day there was a planned trip to the Isle of Skye for a nights camping.

The main reason for the trip was to give him a good run and to make sure all my electric changes were functioning correctly. The cab is totally different to how it was. New seats, both heated, a new dash with new switches, a cubby box and sound proofing. All worked great, especially good was the noise reduction. The engine ran well, with 55/60 MPH being the average speed (not bad for a 1988 Landrover) and I reckon we got about 720Km for a full tank of diesel. 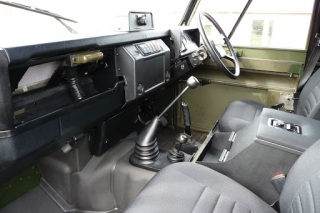 Of course, it sounds like it was an easy fit. It wasn’t. The electrics from the Army is all over the place, with additional wiring for things like NVG headlights. I had to drastically redesign how I wanted the headlights, eventually going for a pod on top of the dash and refitting the original dial switch. I had great assistance from MUD-UK who provided the dash, switches and pod, exchanging a few things with no arguements. With this great service they’ll know for sure I’ll be back when it comes to fitting out the back – I already have my eyes on a few things

The seats, cubby box and sound proofing was from Exmoor Trim who I bought from direct after I emailed them for details about their products. A damaged bit of plastic on the passenger seat was replaced for free, even after it had been 2 months since it was delivered to me. Again, great service.

The back interior has changed a bit, but mainly in the fact that everything has been removed. I had great fun removing everything, with something along the lines of 80 nuts and bolts needing to be undone. Of course, all these holes then needed to be filled so a bit of resin later and all were pretty much water-tight again; nearly all as a bit of water gets in when I’m driving in the rain (all the time around here), but this is through holes that I’ve left open as the bench seat and a storage box needs to go back in.

The rear door has had a panel added to make it a bit neater. I also plan to attach a unit that will house my gas burner; a genious space saver that also lets you cook directly from it as it folds down to allow access to the burner.

The rear exterior has changed slightly, with the addition of a ladder and a spot light. Both are really useful, although the light is temporarly wired up. Once a second battery is installed the light will run from it, along with the two 12V plugs in the front. The main battery looks like a wiring death trap at the moment, there’s so many connections on it. The ladder was purchased from First Four Off road as was the chequer plate panel inside the rear door. Again, there was great assistance from them before purchasing. I also removed the old antenna reel holder that was on the outside of the rear door. I will eventually move the spare tyre from the bonnet to this location
At the front there’s been a couple of changes too, with the addition of two spotlights and a replacement of the original headlights for modern halogen ones. I’d forgotten about the days when the whole headlight unit needed to be replaced when a bulb had blown. So when it came to replacing these headlights it brought it all back to me
The picture above shows the new spots. These were a little tricky to fit, for two reasons. Army wiring and not getting all the correct connectors from Wipac. I managed to fudge it a bit but I need to replace the temporary fittings soon, before the weather starts getting bad (was it ever good?) All my wiring parts were from Autosparks and its from them that I’ll also be getting some of the gear for the rear interior, mainly the carpet and wiring components.
So far then, Larry has been a great success. He’s been hard work, but well worth it; and i’m looking forward to kitting out the back as soon as I can