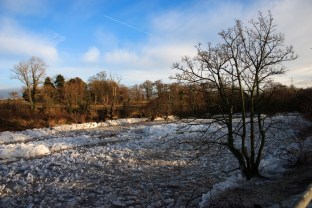 The frozen River Ayr has been a bit of a change. Except for the fact that it has been stopping traffic, rightly so almost, it is quite an amazing sight. Since these photos were taken the “icebergs” have got even larger, but unfortunately they are a bit dirtier; and they also have the odd traffic cone and sticks protruding from them as extra decorations from the kids 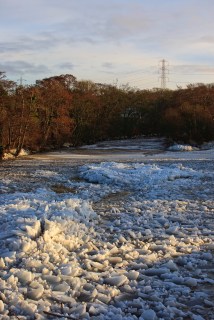 The snow wasn’t that much of a problem for me really, the Landrover coped very well. But it did mean that I was, and still have been, unable to get the Porsche down to Ninemeisters in Warrington. Hopefully it will be next week, but it’s currently SORNed and has no MOT, so I can’t even drive it now it’s thawed out.

The cold weather did bring some really clear nights. The stars were very bright, as were Jupiter and Venus. I can’t wait to get a decent Astronomers Telescope that I can attach my camera to. Won’t be for a while yet though

December the 13th brought some very clear skies, just at the right time to watch the Geminids Meteor Shower. Over a few hours I probably saw a good 40 to 50 meteors, some of which were very bright and colourful – there were a few neon purple and blue ones in there. It was absolutely freezing though. So cold, that when I put down my Rum and Coke glass onto the decking it froze to it within seconds

December has been a very slow month for planes. I’ve hardly seen any new ones; I most certainly haven’t taken any photos. I’ll get around to doing the years stats in the next few days and when I’ve finished I’ll put them on here.

I’ve had two more photos published in the last month. The Swedish Air Force Gripen was in the December Issue of radiouser; and the An-26 below was in the Autumn edition of Propliner, along with the An-12 picture from a few blogs back